There was a moment last year when I was razed by an overwhelming force. At that time I used to walk home from my job, and in those minutes of introspective walk my trauma was harder to deal with. I couldn’t distract myself from the destroyed sense of self I had. One day I moved two gallons of water from my house to my workplace. I realized that carrying something heavy allowed me to angry-walk while concealing my wrath. I could push down the ground violently with my legs without looking like a crazy person. It was a few weeks of carrying gallons of water back and forth, pushing my weight heavily against the ground, and releasing the frustration. Having my arms pulled down by the water helped me to feel this body I had, that didn’t belong to me anymore.

After having this experience with the gallons I understand in a different way Yvonne Rainer’s film documentation of Trio A1. This dance performance is the first section of The Mind Is a Muscle, recorded in 1978, first choreographed in 1966. Compared with other dance performances at the time, Trio A doesn’t focus on interpreting music or representing aesthetic ideas. She performs her movements in a semi-controlled relaxation, with no hurry, no repetition, seemingly improvised. There are no pauses, the boundaries between gestures are blurred, as she describes it: “The end of each phrase merges immediately into the beginning of the next with no observable accent”2. Rainer went to New York to become an actress, she brings into her dancing elements from theater. She uses her abilities of observation and imitation of people’s daily movements, Trio A becomes a fragmentation of gestures that remind me of childish games, physical comedy, military and weird martial arts signs not yet invented. But what first dragged me to her performance was the particular sense of gravity that it produces, and the contempt for the moving body, a body that deals with the muscular memory of the sociopolitical context that it withstands. 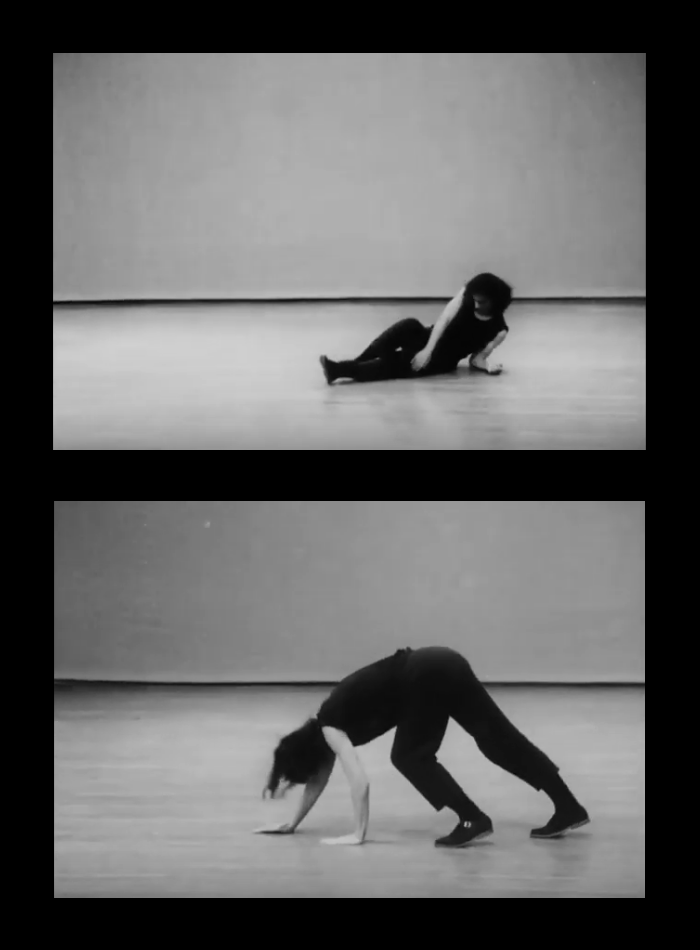 In my home country there is a big cave that people visit, in the middle of the tour the guide turns off the lights for everyone to experience sudden darkness. When that happens people giggle or talk, finding each other nervously. My trauma from last year was similar to the experience of sudden darkness, the space warped around me and my body wasn’t the same kind of solid matter anymore. Reading about darkness I found this definition by Roger Caillois: “While light space is eliminated by the materiality of objects, darkness is ‘filled’, it touches the individual directly, envelops him, penetrates him, and even passes through him”3. In this same text he quotes Minkowski, that describes dark space as a loss of distinction between the environment and the self: “Dark space envelops me on all sides and penetrates me much deeper than light space, the distinction between inside and outside and consequently the sense organs as well, insofar as they are designed for external perception, here play only a totally modest role”4. It occurred to me that if a person can’t find the light switch to get out of the darkness in which they are immersed, there must be a way to recover the senses of the self while still in darkness. The strategy of transporting the 2 gallons of water back and forth allowed me to feel my muscles and dissipate my anger. I was gaining actual physical strength, but somehow the observation of Yvonne Rainer’s performance helped me imagine better ways in which I can think with my body and generate possible representation of – being alone, in a room, ingraining the discipline of the body being able to play around with its choreography of subjugation. In this black and white film the female body moves in a small room, in silence for 10 minutes. Watching it alters the sense of space, through the room behind the screen.

Trio A could be performed by people with no professional dance training, the artist mentions: “It is my overall concern to reveal people as they are engaged in various kinds of activities – alone, with each other, with objects – and to weight the quality of the human body toward that of objects and away from the super-stylization of the dancer”5. Rainer finalizes this text saying: “This statement is not an apology. It is a reflection of a state of mind that reacts with horror and disbelief upon seeing a Vietnamese shot dead on TV – not at the sight of death, however, but at the fact that the TV can be shut off afterwards as after a bad Western. My body remains the enduring reality”6. When we watch a video we feel with our own body the space and the characters on the other side of the screen, we imagine with our nerved mass of muscles how it is being there. Trio A provides its own context and its own sense of gravity that circulates onto the spectator’s body. The observation of the dancer falling down and getting up several times in this fluent effortless way, presents a different relationship of the body with the floor. The female figure, like an articulated balloon, bounces up and down producing an artifice in which the pull-down force is imagined as something that could be breathed around. Rainer describes Trio A as “details executed in a context of continuum of energy”. Continuum that functions as a reset button of the muscular memory and the deconstruction of certain human experiences. 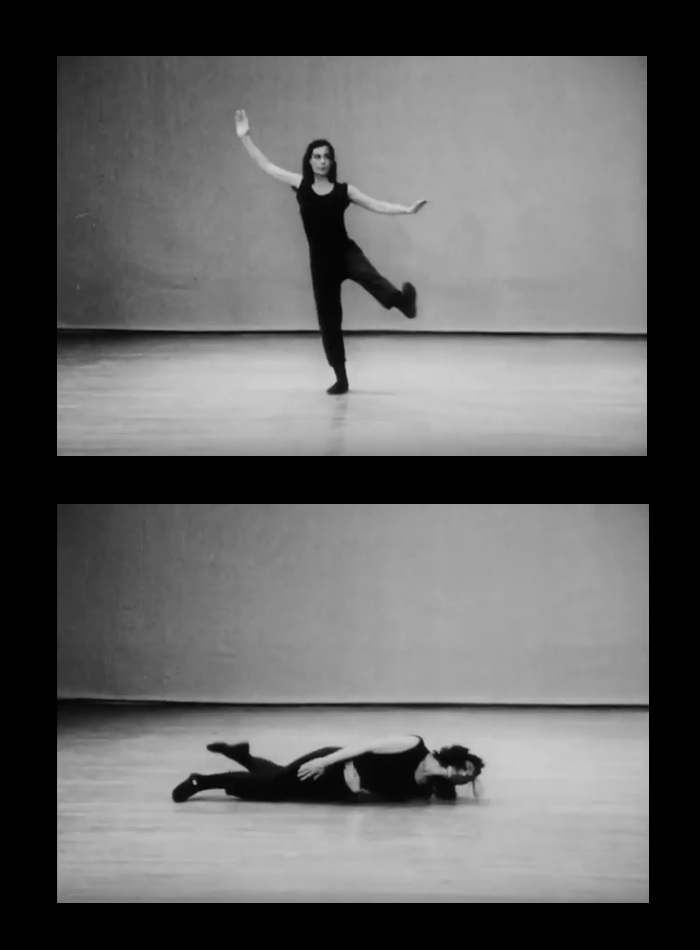 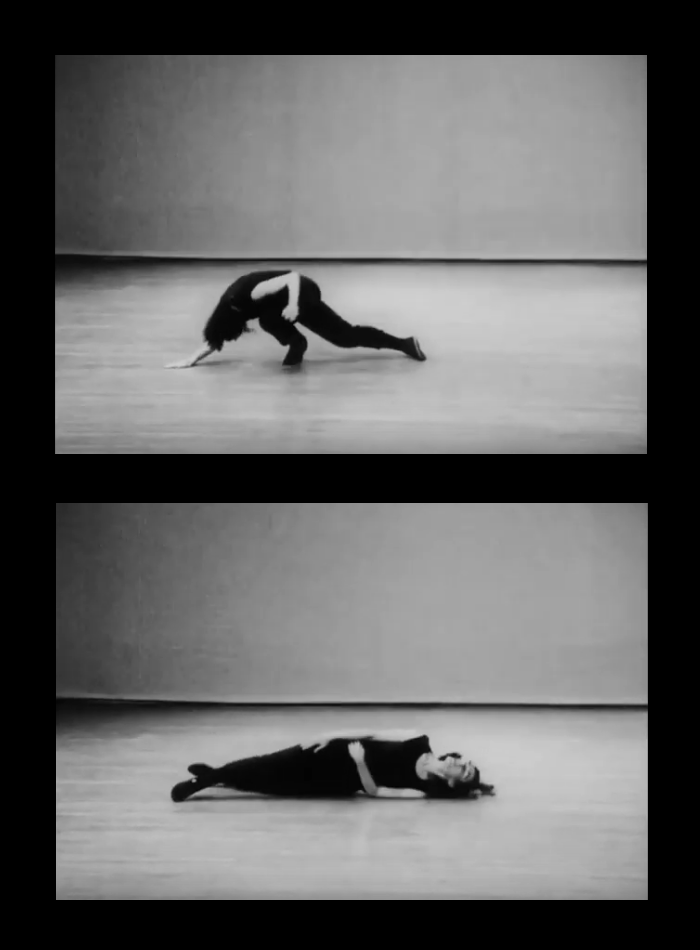 How many times in my lifetime do I give away my body?

Arses that are yield to the couch, fingers to the keyboards

Eyeballs and attention that are yield to being educated,

Body-time that is yield to try to prove our value,

Yield to strangers beds and fictional scenarios behind transparent screens

How many of those moments I dishonored my own will?

The language of the moving body serves to remember that which has been haptically internalized, it could be something simple, like drying your body with a towel after a long shower. But it could also serve to imagine those gestures that don’t exist, that we crave for; which we may desperately need as a strategy to survive the scenario in front of us, built up by many bodies, including ours.

Ania is a visual artist and writer born in Cuba and currently living in the United States. She has travelled and worked in Santiago de Chile and other cities in South America. As part of her practice, she collects videos of people performing simple tasks, she interviews them about the way they move their body while doing their jobs and how a repetitive task changes them. She interrupts people’s meals to ask them to recreate an activity, using the food and the cutlery around. Since the pandemic started, she has been editing videos and writing at home.

1: https://youtu.be/0cOAO4w0h_M
2:  from A Quasi Survey of Some “Minimalist” Tendencies in the Quantitatively Minimal Dance Activity Midst the Plethora, or an Analysis of Trio A. By Yvonne Rainer. 1968
3:   Mimicry and Legendary Psychasthenia, by Roger Caillois and John Shepley. 1984
4:  from Le temps vécu, by Eugène Minkowski. 1933
5:  The mind is a muscle – Statement, by Yvonne Rainer. 1968
6:  Ibid