The Men Who Didn’t Rape Me by AK Krajewska 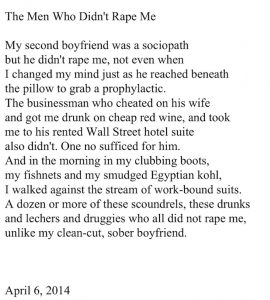 Agnieszka Krajewska is a poet, essayist, and combat epistemologist. She received an MA in Creative Writing from San Francisco State University in 2004, and was ordained as an Adept in the Open Source Order of the Golden Dawn in 2009. Her poems have appeared in two chapbooks, Water Breaking (Ye Olde Fonte Shoppe, 1997) and Residual Heat (Self-published, 2014). She lives in San Francisco, California.

← Like Every Good Boy I Look Forward to Meeting My (the) Rapist by Akpa Arinzechukwu What Happens Later - Sometimes, Much Later by Shawn Aveningo Sanders →